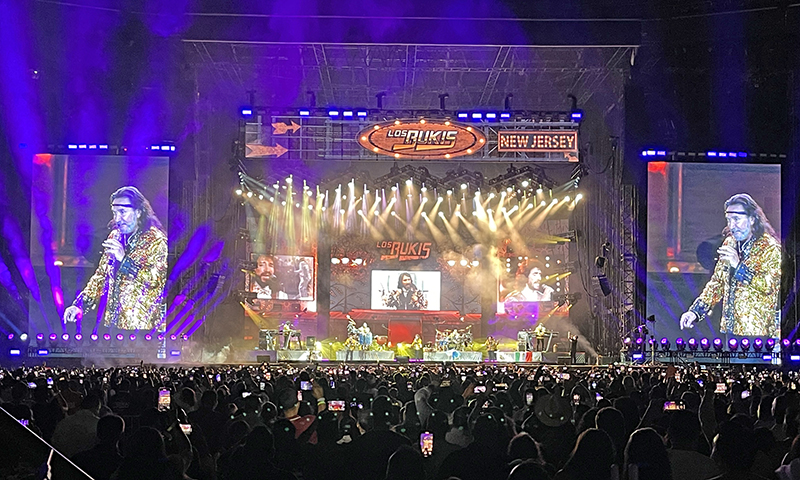 Getting the Band Back Together

Los Bukis are a wildly popular Mexican Grupera band, founded by cousins Marco Antonio Solís and Joel Solís in 1975. In 1996 after a successful 20-year run, they disbanded and Marco Antonio Solís pursued a solo career. In 2021, after a 25-year hiatus, Los Bukis reunited and released a re-recording of their 1986 hit “Tú Cárcel”. They also announced a reunion tour—Una Historia Cantada, which loosely translates to A Sung Story. The nine-date tour—which kicked off at Los Angeles’ newly opened SoFi Stadium on August 27, 2021—was a high demand ticket and generated $49.7 million in sales. [That 2021 leg of the reunion tour earned the sixth spot in the top ten Billboard’s 2021 touring stats]. In February of 2022, Los Bukis announced the second leg, touring to stadiums in the U.S. and Mexico, that kicked off on August 3 at MetLife Stadium in New Jersey. 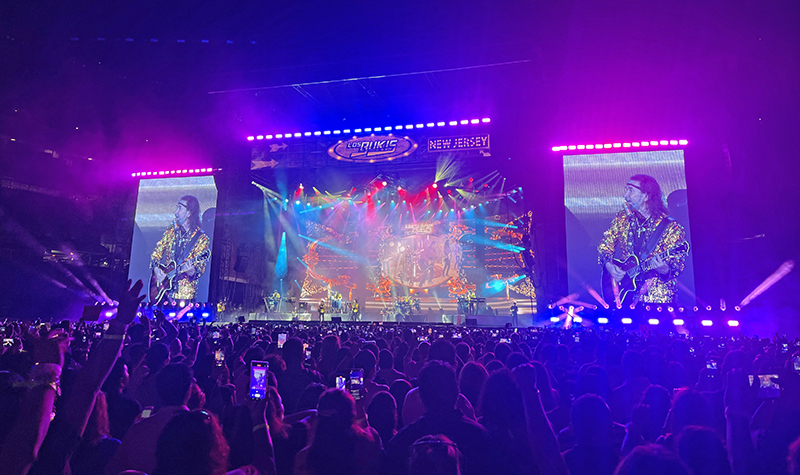 “For this year’s version of the tour, though they really liked the original design, they wanted to change up things and make it more visual; more about the LED video screens and the video on the stage,” says Cruz. “I used the base stage plot from last year’s tour and made changes. To be more about the visuals than the lights. Basically, added the LED video screens on the wings, and more LED video on the stage. I changed a couple of the trusses with lights to fit the video panels.”

Cruz feels that Los Bukis is a different kind of band, “because it’s easy and yet not easy at the same time, because there are seven people on the stage; they all have the same importance. Everyone in the band needs to have the same level of brightness and it’s difficult to do that, of course in stadiums, but I also talked with Oscar Flores, who’s a really great lighting director. He’s worked with Marco Antonio Solis as his LD for the past 10 years.” Flores gave Cruz some advice and tips about the band and helped him create some of the looks for Los Bukis. “It’s so easy to work with Oscar; I had the concept and the visual design, but he knew the details better than me,” Cruz continues. “I programmed the show and delivered it to him, saying ‘here’s the base, but if you need to insert something, do whatever you want’. When we were in New York for the first show, I made a couple of changes, but he had it all down. I also worked closely with Roberto [Alegria] at GST to help make it easier to load-in and load-out.” 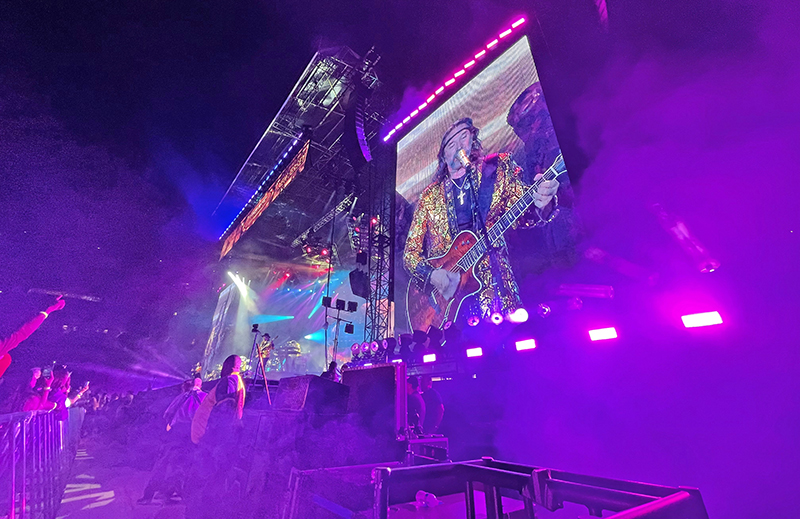 Alegria is a good friend of Cruz’s and they worked together well on prepping for this tour. “Roberto is awesome; it’s always great to work with friends,” notes Cruz. “It’s pretty easy to work with him because he’s always trying to do the best for us. He as a vendor and me as the designer/programmer—we always talk about the best way to do things and how to do them faster.”

Alegria and GST has been supporting Marco Antonio Solis solo tours for more than 10 years, so the “reason GST is a part of the Los Bukis tour is in part the relationship we have with Marco for more than a decade,” explains Alegria. “On this second leg of the reunion tour basically it’s the same equipment as the first leg, with some modifications. They wanted trusses to be able to move up and down throughout the show, so we provided a solution with Tyler Truss products to build 10’x10’ pods. We created a custom bracket to build the pods.”

Cruz knew he wanted to work with powerful fixtures for the stadium shows. “I wasn’t looking for the newest fixtures, but ones with power,” comments Cruz. “I used the Elation Proteus Maximus LED Profile with an IP65 rating. It was a good fixture to use. I wanted to use some visual fixtures, not just a simple moving light, so I used the Vari-Lite VL6000 Beam. It’s a good fixture to use on open air shows because the fixtures are a part of the scenery; part of the stage. Of course, I used some Robe fixtures, because they’re fixtures we can trust. I have Robe, Elation, Vari-Lite, and Martin MAC Quantums for washes.”

Cruz feels that while the lighting design is simple, he had lights that are good for photographing the band. “We don’t have too many lights; in fact, we cut lights from the last tour,” says Cruz. “I have maybe 20 or 30 lights less compared to the last leg of the tour. The big details are for the cameras. We needed to have enough light for the cameras and to cover the band.” 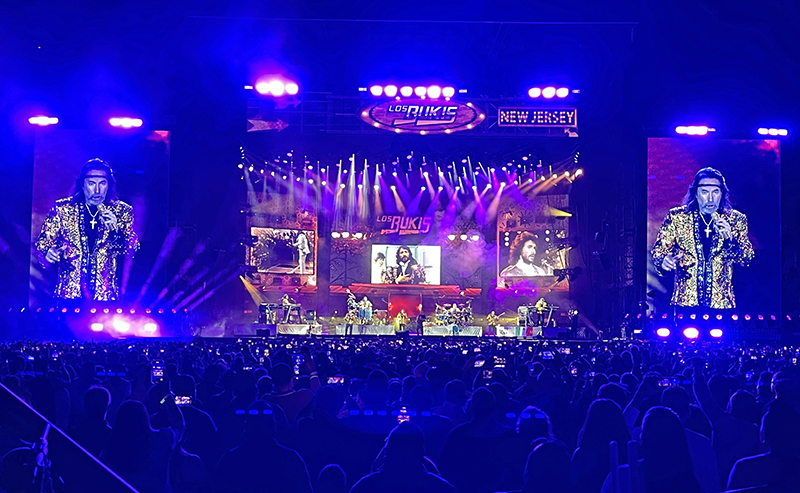 For the 2022 tour, Cruz opted to use standard followspots at the stadium, instead of remote-controlled moving light followspot options. “We tried to use remote followspots on the last tour, but it’s too complicated to use remote followspots on the Los Bukis stadium shows. We have two lines on stage; the lead singer, guitar, and bass player on the front line and we have two keyboards, drums, and percussion at the back line. For the second line, I use [Robe] BMFL WashBeams as the key light on the stage. For the front line, I use traditional followspots.”

Cruz gives credit to the lighting crew from GST Lighting Systems. “It’s really important to give credit to everybody, because this year we didn’t have a chance to do tech rehearsals,” the designer says. “The last tour we’d been in Bakersfield for one week, mounting everything and doing the rehearsal with the band. But for this time, we had a whole new crew and we got one day before the show at the MetLife Stadium. Yes, it was crazy, but the crew was perfect.” 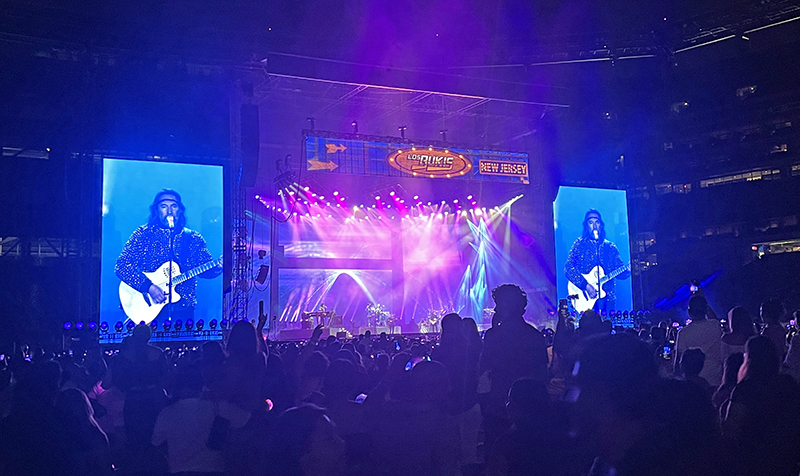 Global Trend Pro (GTP) provided the video screens, the media server, the switching, and the cameras for the Los Bukis tour. They supported the Video Director, Héctor Ortega Trejo to deliver the powerful visuals and I-Mag shots to the large video screens on the stage wings. “Héctor is in charge of all the content, and he oversees all the cameras,” comments Campos. “It’s a pretty straightforward rig. The most complicated part was basically the network system we designed between the media servers and the Barco E2 image processors; all the switching and the servers to take in all that the cameras were sending the video team. Then they they’re putting the feed through processing and adding their graphics on and sending it back out to the video screens. We did make some suggestions to optimize the system—it’s a monster rig—so it would all go up easier and faster.”

The LED video screens on the Los Bukis’ tour are Triton Visual Solutions’ Black Widow CTS Touring system with a 5.9mm pixel pitch. The Black Widow system was created—and is rented and sold—by Global Trend Pro. “It was one of the first true touring systems with a dual-use panel and built into a high wind-resistant removable frame,” says Campos. The media servers are from Silverdraft, a company that builds servers and computers for virtual productions. “They build a lot of servers for digital stages, for productions like The Mandalorian,” explains Campos. “They make custom boxes for that world, and we do a lot of production work in that world, we use them for our XR Stages, and they work great. So, we just took some of their boxes and moved them into the live event world. They’ve done great on the tour. Silverdraft designed them for us, to be tourable.”

By having inventory of LED video panels and video gear in both California and Mexico, Global Trend Pro was the right partner for the Los Bukis’ tour as it was planned to play both sides of the border. “This tour is crossing the border and playing dates in Mexico,” says Campos, “and we do a lot of business in Mexico. We supply a lot of the big companies with LED in Mexico. Since we have a presence on both sides of the border, we have staff and equipment in both places. That certainly helps with a tour like this one.” 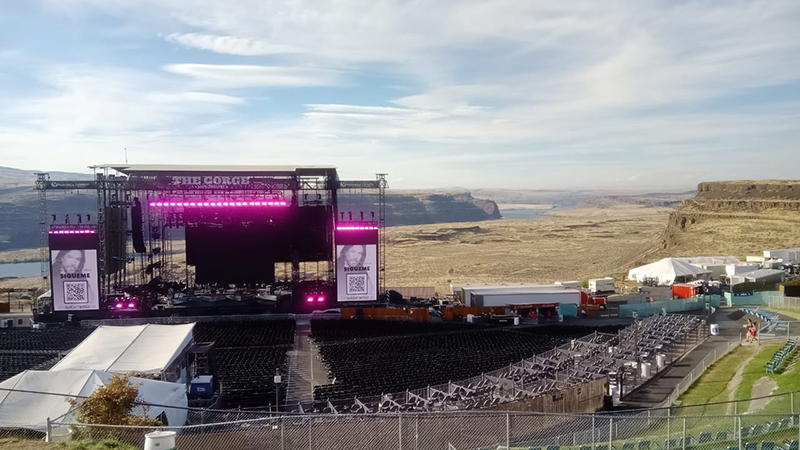 A Tour for Everyone

Los Bukis’ second leg of the tour is proving just as popular as the first leg. They are not only drawing in their original fans, but their fans’ kids as well and lots of new younger fans are flocking to the shows. “I’m 53 years old and I grew up listening to Los Bukis’ music,” comments Alegria. “My dad, my mom, my uncles all listened to their music. I was a teenager when Los Bukis were on top in the 80s. When Marco went solo, he toured worldwide and sold out throughout Europe. Los Bukis’ music was in your family; two or three generations listened to them. Los Bukis was the kind of band that you’d listen to on a Sunday drive, or on a picnic or out swimming; you’d have music on all the time. A lot of people call them the Mexican Beatles.”

This December looks to be the end of Los Bukis live touring career so it’s great that so many fans—old and young—got the chance to see them play live once again these past two years. Their music will certainly continue to be a much loved soundtrack for many people over the years and bring families together through music.

This article was written by Michael S. Eddy.